It’s that time of year.  You know it.  You love it.  Guess what’s inspiring me right now…  FOOTBALL.

You guys.  Somewhere out there on the other side of her phone screen, my momma just fell right out of her chair.

If you know me at all, you know that this opening line would make it appear as though my little typing fingers have been hijacked.  But I promise, it’s true!  Football, y’all!

We’ve reached the point in the high school season where teams are advancing to the finals and inevitably, some teams are not.  It’s the nature of the game really.  You win some, you lose some.  But for everyone wrapped up in high school football right now, a loss probably feels like you’ve lost it all.

For our own little town, we saw the rejuvenation of a football legacy that has lain dormant for nearly 20 years.  I have to be honest and say that sports just aren’t my thing (shocker, right?), but I loved seeing my boy looking up to those players and rooting for his team and investing himself heart and soul into the journey.  There’s something to be said about the way a team can not only bring together its players but an entire community cheering them on.  And while the season didn’t quite end the way so many wanted it to, I pray it lit a spark back into the pride of a town and the fight of its players.

There was another team I was following from a distance, the Wampus Cats.  (In full disclosure, I have no idea what a Wampus Cat is, but it sounds rather ferocious).  My dear friend’s son plays for the team and they advanced farther than anyone could ever remember, making it to the semi-final round of the playoffs.  They too, however, came up short.  Someone posted a video of the coach’s season-ending speech to his team, staff, and community after the game.  As I watched, I cried my little eyes out.

With love and fervor that even garnered a few “amens” right there on the football field with players taking a knee and fans gathered round, this coach congratulated his team on a great season.  He thanked those that had dedicated their time to helping coach the team.  He acknowledged those support teams that had cheered them on.  But with a lump in his throat, he directed the final part of his speech toward his players.  And the last words he said punched me right in the gut.

And in the back of my mind, I could hear the words of a very familiar worship song right now, “…Chases me down, fights til I’m found, leaves the 99.  I couldn’t earn it.  I don’t deserve it.  Still you give your love away.  Oh the overwhelming, never ending, reckless love of God.”

How many times in our lives have we found ourselves in that very place?  Having fought and come up short?  Maybe because of our own misstep, maybe because of circumstances that knocked us down, maybe because we still have work to be done.  We can be so tempted to hang our heads in shame.  We can be so tempted to sulk in our losses.  But there is a voice, shouting from the other side, “I will hold you to the high standard, because that means I love you.”

God’s love for us never goes away.  He is in reckless pursuit of our hearts.  And He wants us to be in unabandoned pursuit of our purpose.  When you get knocked down, try again.  Hold your head up high and keep at it.  Rest in the overwhelming certainty, that He loves you, and that will never go away.

Learn from the missteps, push against the unfair circumstances, work harder and get ready for that next season.  Tomorrow’s purpose is waiting just on the other side of today’s pain… 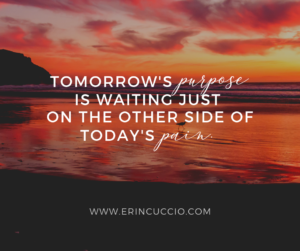